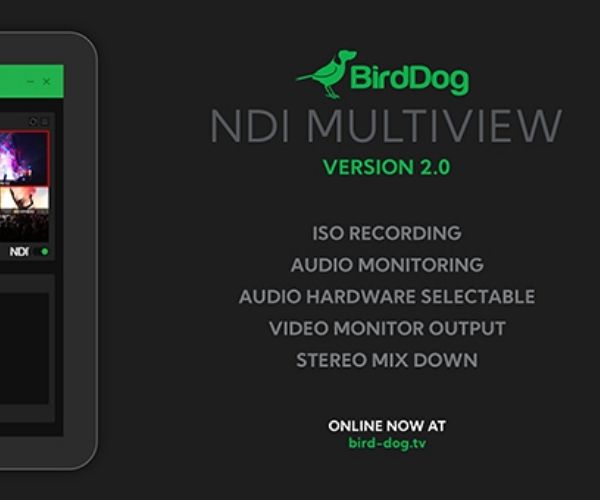 BirdDog has announced the immediate availability of version 2.0 of NDI Multiview Lite and NDI Multiview Pro with new features and free upgrade for all users.

Following on from the popular NDI Multiview release in 2020, Multiview 2.0 adds ISO Recording to the Pro version in resolutions up to 4Kp60 in native NDI codec with the number of NDI streams to record only limited by system performance.

Both NDI Multiview Lite and NDI Multiview Pro are the beneficiaries of a raft of new Advanced Audio Monitoring tools including the ability to choose any audio track to monitor with the Multiview output, the ability to choose any soundcard to monitor out of, and the Stereo Mix Down feature. Stereo Mix Down allows a user to take any two audio tracks from any NDI stream and monitor them as a stereo pair, without affecting any of the ISO recordings.

Immediately available for purchase, NDI Multiview Lite 2.0 and Multiview Pro 2.0 is also available to existing users as a free upgrade.